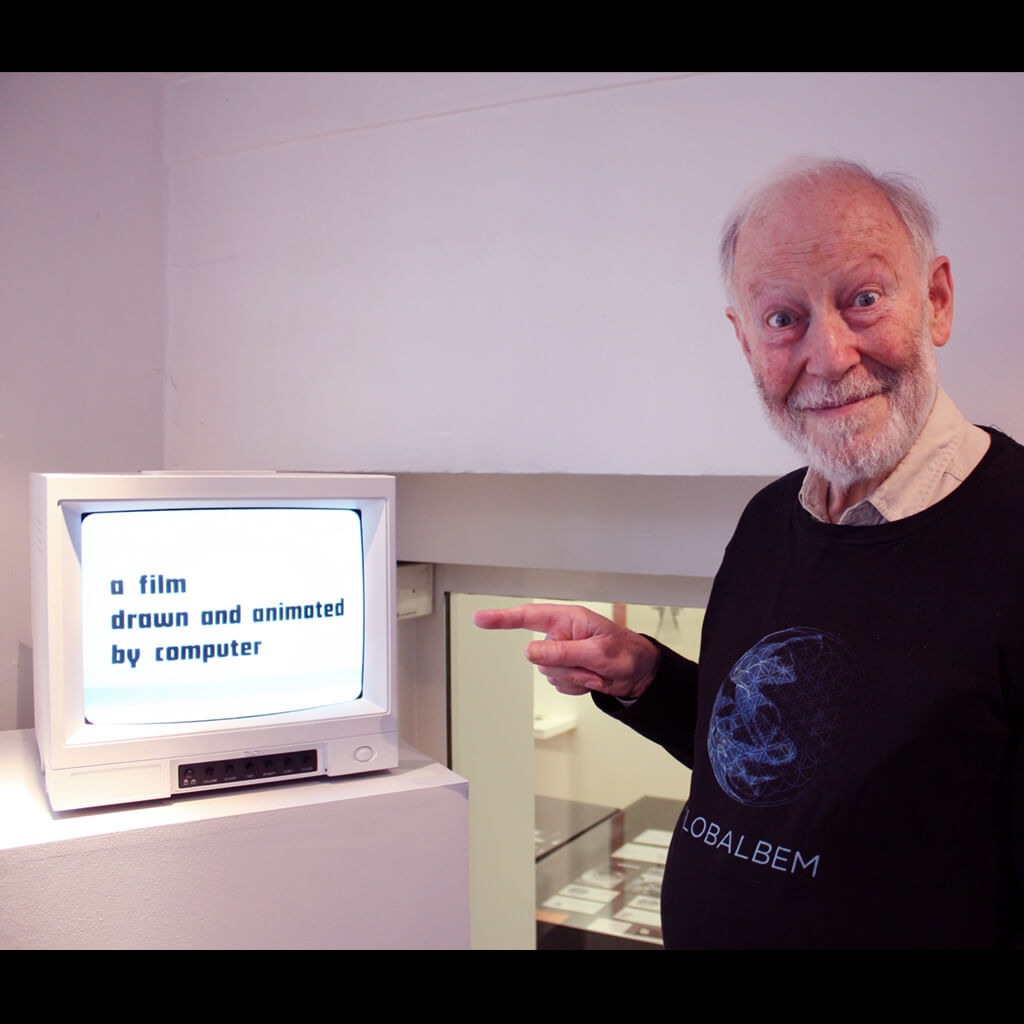 > Tony Pritchett created the first computer-animated character in the world.

A bold statement, but I believe it to be true.

I’m not a computer art, film or animation historian, but in this post, I’m going to explain how I’ve arrived at this conclusion. It’s. a bit of a long blog post!

// Goodness knows what modest Tony would have thought about this – and personally I’m not someone who thinks it’s important to be the ‘first’ or the ‘best’. However, there’s a lot of disinformation out there online (in case you weren’t already aware!) and so I thought I’d do my best to set a few records straight-er.

The Flexipede is clearly what us animators call, ‘character animation’. The creature appears to be sentient. It is alive and reacting to it’s environment.

Furthermore, IMHO the little creature gives is the world’s first comedy performance in a CG cartoon. There’s no hard-hitting punchline – but the film is packed with whimsicality.

AND – I would dare to claim that Tony created the world’s first computer generated animated story. Not a lot happens – but it the film does have a clearly defined beginning, middle and end.

// Tony was a wonderful storyteller in real life. He also had a great sense of humour and comic timing.

So, moving on: IF The Flexipede =  character animation, is it the world’s first?

Well, The Flexipede was created in 1967.

The Tony Pritchett Archive contains loads of documents (correspondence, listings etc) showing that it was created over a 6 month period.

Schrödinger’s Kitty – I would say this cat appears to be ‘alive’. It’s what us animators call, ‘character animation’. More about this later.

In 1968 a group of Soviet physicists and mathematicians lead by Nikolai Nikolaevich Konstantinov, created ‘Koshechka’ (Kitty) using a BESM-4 computer. This has been referred to as:

“…the first computer animation of a character, a walking cat.”

I love the way the film looks and wanted to find out more about how it was made. I’ve found a paper published in 1974 but I don’t speak Russian – or computer. Luckily for me, Dr. Victoria Marshall kindly put me in touch with her colleague at STFC, Dr. Oleg Chekhlov.

A huge thank you to him for helping me understand the process by which ‘Koshechka‘ was made. To summarise: It involved printing out ‘W’ characters as listings and also adding hand drawn elements. It seems as if the ultimate goal was to let the computer work out the ‘mechanics’ of the movement – and then allow the artist to trace over and add all the fun acting bits and ‘the artists’ hand’. Sounds like a great idea to me!

Anyway, the film is clearly a GREAT ACHIEVEMENT, but it was created later than Flexipede. Sorry Kitty.

// Tony and Dr. Benedict Nixon created some CG animation at the BBC to illustrate how a Turing machine functions. This was for a series of educational programs with the great title, ‘Mathematics In Action’. Like the makers of Koshechka, they used animated characters, printed on listings paper. They did not trace them, but did film them on a (BBC) rostrum stand. I have a few frames from the film, which is in a very bad state of repair. It seems likely that it was created in 1966. I’ll create a separate post about this at a later date.

People name Sine Curve man as being the first, but the duo made other animations too – including arguably the most famous one, ‘Hummigbird’. Where as Sine Curve Man was output via pen plotter, Hummingbird was output onto a Calcomp 835 Microfilm recorder. Then there’s Hummingbird II, too.

Was Hummingbird the first computer-animated character? According to some of the internet, yes.

TP loved the original ‘Hummingbird’ and created a piece of animation based on it– which I will tell you more about some day.

Also just to say that I’m also a great admirer of Csuri ’s artwork and if you’ve never seen any I recommend taking a look.

The digitised creature drawn with outstretched wings, was ‘cut up’ into lines. These lines were transformed by the program written in FORTRAN, but whereas TP used FORTRAN to create what us animators call ‘character animation’, Csuri used it to do a thing called ‘morphing’.

Csuri took a line and told the computer to transform that line’s x/y co-ordinates over time, whereas what TP did was say to the computer, okay – this frame you draw these co ordinates…the next frame these… and so on – and he did this in such a way as to create, ‘the illusion of life’.

Morphing is a technique in the character animators tool kit, but Csuri didn’t use it to create character animation. The bird does not appear sentient like Kitty and Flexipede do. That hummingbird is dead! It doesn’t even blink. “‘E’s dead, that’s what’s wrong with it!” It’s a manipulated still drawing, not a cartoon character. Does it care? Probably not. It’s in the MoMA.

Csuri never claimed to have created the first computer-animated character. He agrees that he created the words first morphing images – (although at the time, the term hadn’t been coined.)

And so it looks like the early bird hasn’t caught the Flexipede, which is still in the running as the world’s first computer animated character… But OH NO! Drat and double drat Muttley. Here comes Michael Noll with his Computer Ballet, made way back in 1965!!!

Computer Ballet (1965) by A. Michael Noll at Bell Labs. Nb. Both a 3D stereographic and a 2D version were created.

Noll used FORTRAN IV to program an IBM 360/65 (with 1MB of memory!) using the same technique as TP used to create Flexipede, whereby the film was output to a microfilm recorder. (SC4020 for Ballet. Benson Lehner for Flexipede).

In the film we see white lines on black – this is effectively a positive print – you see the white lines ‘drawn’ by the microfilm recorder. The Flexipede is a duplicate negative – so that’s why you see black lines in white.

My initial statement, ‘Tony Pritchett created the first computer-animated character in the world’, is FALSE.

But hang on… Those dancers… I just don’t see them as appearing ‘alive’… As a character animator, I perceive Noll’s Computer Ballet is motion graphics and not character animation.

I think it is fair to say that The Flexipede is the world’s first CG character animation and the first ‘illusion of life’ achieved through animation.

Compare the Flexipede’s spiral eye reacting to stimulus onscreen… this is animation acting. It is what we call a ‘take’. Noll’s ballet dancers are wonderful but wether they are acting or not is debatable.

And who am I to judge anyway? Just some character animator who’s learned how to press few Adobe software buttons :)K