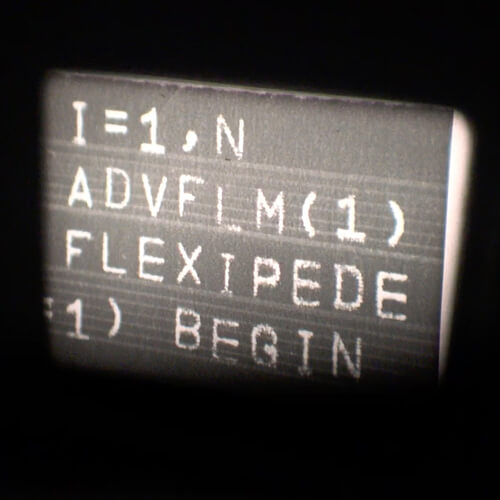 Fired-up by Tony’s process, I’ve successfully built a working 16mm microfilm recorder. The imagery I am getting is pin sharp. Time to start making films.

Huge thanks to Karina Townsend for lending me her late father’s H16 Bolex camera. Her dad, Raymond Townsend created some beautiful documentary films. It’s likely that he used the camera that Karina has kindly leant me. In addition to making documentaries, Raymond worked as a matte-painter on several Powell and Pressburger films. Notably, he created the iconic stairway to heaven in A Matter of Life and Death (1946).

A bit like programmers in the 1960s who didn’t actually have access to an expensive computer – I knew my plan would work in theory……. but had only been able to view some of the results on a Steenbeck.

However, thanks to Kev Faulkner at my local film club, The White Bus, I now own a 16mm projector. (Thanks for doing me a good deal, Kev).

I couldn’t believe my eyes when I saw how sharp the hand-processed 16mm images were (both vector line art and live action footage).

The image above is a low-res photo taken on my phone, of an image projected onto my projection screen aka my white window blinds. Believe me – the actual images look great. I’ve even created some in camera mattes. Theranos II averted.